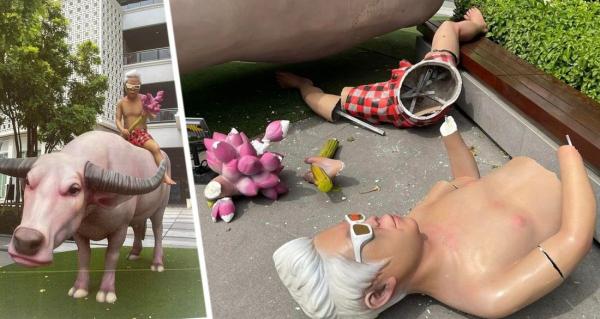 European tourists, presumably British and German, have been accused of destroying a famous statue of a buffalo in Thailand, which was made as part of a theme dedicated to the idea of ​​”calm” and “chaos”, in a “drunk frenzy”.< /p>

The sculpture of an albino buffalo and a rider was located outside an art gallery in Bangkok's Sam Yan district until, according to The Thaiger, British and German tourists decided to climb on January 7 at 2:00 am after drunken fun.

The art object, called “Buffalo: Tranquility”, was on the lawn as part of an exhibition called Art Biennale 2022. However, the statue was not placed inside the gallery, but outside. A massive four-meter piece of art created by Thai artist Maitri Siribun, complete with a topless rider sitting on it, attracted the attention of a drunken group of tourists – three women and one man. Local media claimed that among them was 34-year-old Briton Joshua Anthony Burgoyne – allegedly he, like the girls, did not like the statue and decided to climb it. The first attempt failed, the traveler collapsed to the ground. The second was more successful – the tourist almost climbed up, but fell down along with the massive structure. The whole series of adventures was caught on CCTV cameras.

On Saturday, January 7, one of the organizers of the group, Professor Apinan Poscianada, posted the following message on social media accounts: Samyang Midtown, admired by tourists and art lovers, was destroyed by a group of English and German tourists at 2:00 am. ”

The police detained the perpetrators, while the group of looters showed no remorse, did not apologize for the damage and did not agree with the established amount of damage.

Help: This year's annual exhibition was devoted to the theme “Chaos: Calm”. This year, the gallery features 200 works by 73 Thai artists and 31 other nationalities. After the incident, the statue was repaired as best they could and placed in the “Chaos” category.

For those who care about a healthy lifestyle, we recommend reading: “Scientists have established a favorable diet for pregnant women.”