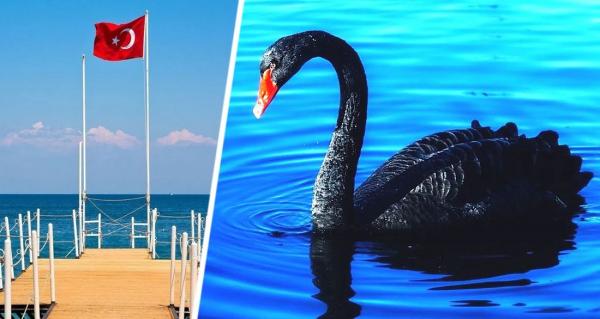 The Black Swan came to the resort province of Antalya. This is not about hard-to-predict events and large-scale upheavals that affect all areas of life, and which are often called the “black swan” because of their rarity, but about a rare bird that is endangered not only in Turkey, but also in the world. .

According to Turkish media, the waterfowl was first seen in 2018 on the coast of Bodrum Bitez, the second time this summer in the Serik district of Antalya. It was noticed by tourists swimming in the sea and vacationers walking along the beach. According to them, the swan first swam in the sea, and then came ashore. For some time he wandered in front of the astonished holiday-goers and flew away. A brief visit by a black swan, now endemic and protected in the Australian region, was filmed on the Serik coast with mobile phones.

The swan, which is found in the southern parts of Australia and Tasmania, is known to be completely black . Its length is from 1 to 1.5 meters, and its weight is from 4 to 9 kilograms. Representatives have a feature – they have the longest neck of their kind. Russians are more accustomed to seeing white swans on the ponds. However, there are known cases of our compatriots meeting with black representatives of the duck family.

For those who care about a healthy lifestyle, we recommend reading: “Scientists have found that bed bugs can cause mental illness in people.”