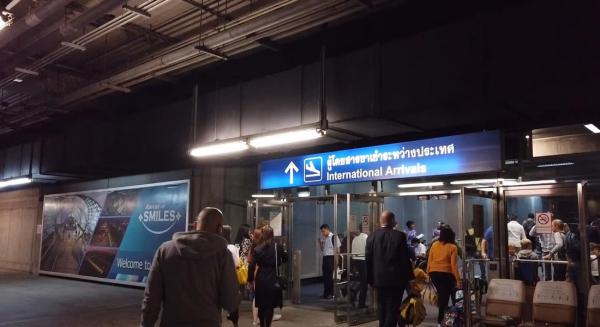 Immigration officials at Suvarnabhumi, Bangkok's main and busiest airport in pre-Covid times, are struggling to cope with the growing influx of foreign tourists flooding into Thailand.

Thus, photographs of the air harbor “choking” from the influx of tourists, taken on Sunday, October 20, showed promising prospects for the high tourist season in Thailand, which lasts from November to April. According to The Thaiger, from 13:00 to 17:00 on Sunday afternoon, 76 flights landed on the airport runway, an average of 20 flights per hour. According to Immigration Bureau spokesman General Chengron Rimfadi, an average of 3,000-4,000 foreign tourists passed through the immigration office that day on average. This is by far the busiest airport before the pandemic.

To ensure that arrivals do not have to wait at immigration for more than one hour, as was the case in Europe last summer, all immigration booths were previously staffed, and employees spent no more than 45 seconds checking passport data, visa status, personal biometric data and blacklist status of each visitor.

At the same time, staff are closely monitoring to ensure that foreign criminals posing as tourists do not slip through the net into the kingdom ahead of the APEC summit in Bangkok on November 18-19, in which they will attend leaders of 18 states. The Presidents of Russia and the United States have not yet confirmed their participation in the event.

In preparation for the busy season, the airport has increased the number of immigration booths from 92 to 112. Each booth will be staffed during opening hours, officials said. It was clarified that the Bangkok airport is capable of registering about 6,500 passengers per hour without compromising security.

“Airports in Thailand (AOT) help the immigration process run smoothly by lining up passengers and helping them prepare their paperwork before going through immigration. Currently, Suvarnabhumi Airport receives an average of 45,000 to 50,000 people every day, and the airport expects that numbers will only increase,” the publication noted.

According to tourism experts, several measures contributed to the increase in the number of foreign arrivals Thai policy, including providing tourists with a longer stay in the kingdom: the period of temporary stay of Russian tourists entering Thailand from October 1 to March 31, 2023 on visa-free 30-day stamps will increase to 45 days. In addition, the loyal attitude of travelers is due to the legalization of marijuana for medical use and the complete removal of anti-COVID restrictions and entry requirements.

Earlier, Turprom wrote that “Tourists in Thailand were told how to avoid the deadly bite of a poisonous jellyfish and that do if she stung.”

For those who care about a healthy lifestyle, we recommend reading: “A dermatologist told how the location of acne on the face indicates certain diseases.”