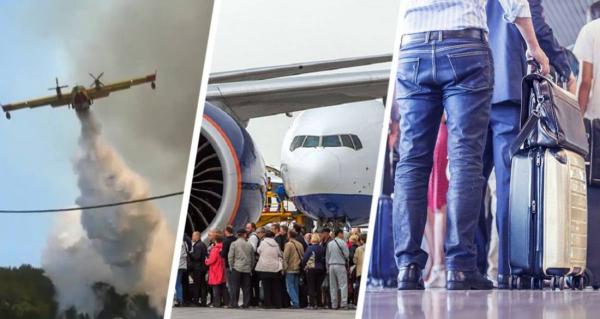 Hundreds of tourists and local residents were forced to evacuate from the famous Greek resort island of Lesvos. The “heat wave” that swept over Greece brought forest fires to its resorts, quickly approaching the resort areas, and so close that they began to threaten tourists.

According to local media, a large forest fire on Saturday evening approached the beach resort of Vatera – the flames raged a few meters from the buildings, tourists and residents were forced to flee. The Vatera City Hall ordered a preventive evacuation, 450 people were taken out of two hotels and almost a hundred houses, with nine people evacuated directly from the beach, including five foreign citizens.

Two houses have been destroyed by flames so far. No casualties have been reported yet. Fire departments deployed, extinguishing continues.

In total, 53 fires were recorded in Greece on Saturday alone in different regions of the country. Including burning forests not far from Athens and the Peloponnese. There was also an evacuation – mostly local residents.

And, most likely, this is far from the end – since Greece is only the first days of a heat wave that will last at least ten days. Temperatures of 42° are expected in some areas. This raises concerns about new fires – rescue services assure.

For those who care about a healthy lifestyle, we recommend reading: “Nutritionist Kovalkov called products that prevent you from losing weight.”