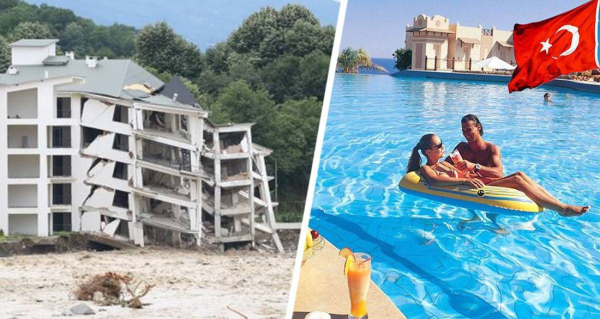 < /p> Flooding and downpours have seriously damaged a thermal hotel under construction in the Turkish city of Düzce. Heavy rains led to flooding of roads, and even to the collapse of a new block of one of the already operating hotels right into the river.

According to the Turkish media, we are talking about the Derdin Thermal Resort Spa complex, which includes a hotel and a residential complex, partly under construction, partly operating. Flood waters also threatened the already built hotel buildings, the restaurant and vegetation on the territory suffered, while the flooded river washed away the complex under construction to the point of collapse.

The situation is complicated by the fact that local roads are flooded in the region, and you have to get there by alternative methods. However, the hotel management has already stated that it plans to resume its work in three months.

OUR REFERENCE: the city of Düzce is located in the north-west of Turkey, at a distance of a little more than 200 km from both Istanbul and Ankara, and only 30 km from the Black Sea. As a SPA resort, it is mainly used by local tourists.

Note that quite recently, an emergency occurred at one of the popular tourist resorts in Turkey: the hotel terrace, which stretched along the entire wall, collapsed. The incident occurred in the town of Chitflik (Cesme district, near Izmir). As a result of the incident, no one was killed or injured, Turkish media reported, since, fortunately, no one was on the terrace and under it at the time of the collapse. Read the details at the link. Most seriously, the elements went through the hotels in Turkey last year – and these were forest fires. Marmaris and Bodrum suffered the most – in the latter, for example, tourists were evacuated from three five-star hotels. How it was – read here.

For those who care about a healthy lifestyle, we recommend reading: “Scientists have found that bed bugs can cause mental illness in people.”