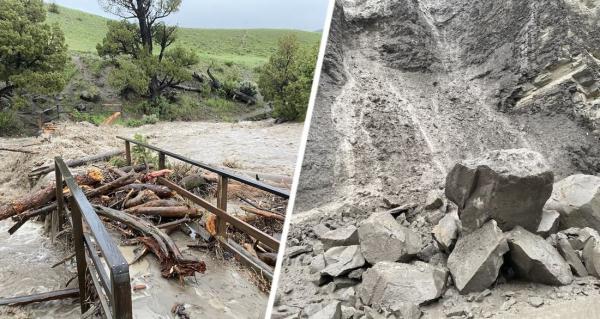 The famous Yellowstone National Park, one of the most famous attractions in the United States, was closed for at least a week. The reason is heavy rains that caused floods and landslides that destroyed roads. Tourists even had to be evacuated from some areas of the park, in some places, tourists, cut off by rain, are waiting for the weather to improve.

“Our first priority was to evacuate the northern part of the park, where we have numerous road and bridge failures, landslides and other problems,” Yellowstone National Park Superintendent Cam Scholly said. Tourists will be evacuated from the south of the park later.

In social networks, many videos and photos show bridges and roads that are literally carried and flooded by a raging stream. “We were supposed to leave, but our highway is now hidden under water,” a tourist family from Indiana, who rented a house near the park, told local media. Tourists are glad that they managed to stock up on food, so they do not panic.

Flood levels on the Yellowstone River are also “surpassing record levels,” according to the park's website. It is closed to tourists until at least Thursday, but the ban is likely to continue further.

Our reference: Yellowstone is a park located at the bottom of the “supervolcano” of the Yellowstone caldera, which, in turn, is the largest volcanic system in North America. It was formed as a result of a huge eruption 630 thousand years ago. The consequences of violent volcanic activity mainly attract tourists – for example, there are about 3 thousand geysers in the park, which is 2/3 of all geysers in the world. Among them is the world's largest geyser “Steamboat Geyser”, as well as one of the most famous – the geyser “Old Faithful Geyser”, throwing jets of hot water to a height of more than forty meters with an interval of 45 to 125 minutes. Also in the park there are about ten thousand various geothermal sources, including hot and hydrogen sulfide springs, mud volcanoes and many others.

By the way, Yellowstone National Park appeared as the original site of a global volcanic eruption and displacement of the Earth's continents in the famous disaster movie “2012”.

Such a “foundation” provides not only popularity among tourists, but also problems. For example, in 2003, tourist access to the Norris Geyser Basin was limited, as increased activity and higher than normal water temperatures were recorded for some of the basin's geysers. Gas emissions and soil uplifts are recorded, as well as numerous small earthquakes. So far, the most famous is the 1959 earthquake of magnitude 7.5 with an epicenter just north of the park border. By the way, it led to a huge landslide, which partially destroyed the dam that protected Lake Hebgen. The earthquake then killed 28 people.

For those who care about a healthy lifestyle, we recommend reading: “Scientists have found that milk consumption by men increases the risk of prostate cancer.”