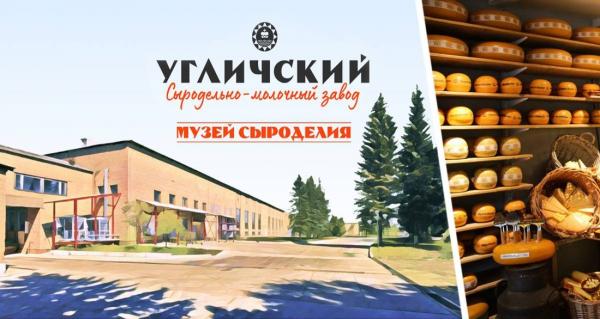 By the next season, one of the popular cities of the Golden Ring – Uglich – should acquire another point of attraction for tourists. On the territory of the Uglich Cheese-Dairy Plant, work is starting on the creation of the Museum of Cheese Making. Representatives of the AgriVolga agricultural holding, which includes the plant, told the correspondent of the TURPROM infogroup that the museum should receive the first visitors as early as 2023. While the design bureau “B & K”.

“Paying tribute to the traditions that were born on the Yaroslavl land back in pre-revolutionary times in the artels of Nikolai Vereshchagin, the father of Russian cheesemaking, USMZ decided to create a Cheesemaking Museum here. This will become a new point of attraction for the guests of Uglich, will expand the possibilities of tourism in the Yaroslavl region, including gastronomic and educational tourism – these areas are now in trend,” the organizers said. According to Andrey Molev, General Director of the plant, the plans to create the Museum of Cheese Making were born in the process of modernization of the plant. “During the modernization of the plant, we created a panoramic glass wall through which tourists can observe the production process. The exclusive items of old equipment that we have preserved will become its exhibits. Together with our partners, experienced specialists from the B&K Design Bureau, we began to develop the concept and design of the Museum,” said USMZ General Director

The design and concept of the museum will be handled by Design Bureau B & K” (named after its founder Eric Belousov and co-founder Maria Kornilova), which develops modern museum expositions at the intersection of interesting architectural and design solutions. This creative team worked with the Tretyakov Gallery, the Pushkin Museum, the Shchusev Museum of Architecture, the Moscow Film Festival, and also developed concepts for corporate museums and exhibitions, including for Rosatom, Sberbank.

“We all love cheese. And when we saw the powerful modern production at USMZ, we were impressed and even more inspired. Of course, such a big topic as cheese making can be revealed from different angles. This is both a historical context and the context of modern production, this is work with archives. And of course, such a museum will be rich in information from a cognitive point of view,” said Eric Belousov, founder and art director of the Design Bureau “B & K”.

The authors of the museum concept plan to tell about the history of cheese and cheesemaking from the very beginning, touching upon the first attempts at cheesemaking in the era of Peter the Great, focusing on what happened in Uglich land in terms of the development of cheesemaking. Much attention will be paid to the personality of Nikolai Vereshchagin, the founder of cheesemaking in Russia, as well as his followers, who will talk about the famous “Vereshchagin Triangle” – the places where cheesemaking developed. The exposition of the museum will definitely tell about the history and development of the plant (USMZ), as well as about modern cheese production and the unique cheeses that are produced here.

The museum will have its own chips, unique features – but the designers promise about this tell later. “The most important thing is that this facility will definitely become one of the highlights of Uglich, expanding the tourist and excursion opportunities of this ancient Russian city. We are also facing an important task from the point of view of developing tourism in Russia. We hope that our work will contribute to the fact that people will come to Uglich with even greater interest to visit our museum,” said Maria Kornilova, co-founder and creative director of the B&K Design Bureau.

< p>For those who care about a healthy lifestyle, we recommend reading: “Scientists have listed simple daily habits that reduce the risk of a dangerous disease.”