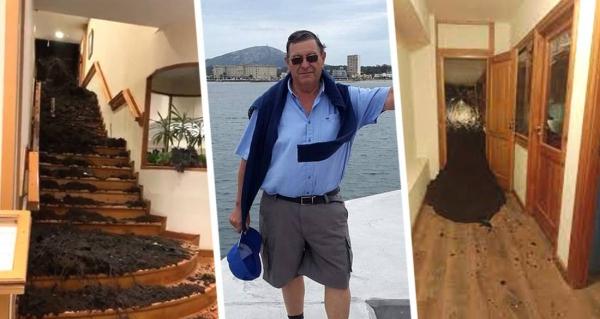 Tourists who were vacationing at the Huinid Hotel in the popular mountain resort of Bariloche in the Argentine province of Rio Negro became a victim of a natural disaster. The incessant rains caused a landslide that covered the hotel, completely blocking two floors. The death of one tourist, 78-year-old Victor González Giovanelli from Uruguay, has been positively confirmed, and two more tourists are being sought while they are reported missing.

The landslide brought down a retaining wall and covered the resort, which includes two buildings, spa salon and several houses. Moreover, at the time of the disaster, the resort was 75% full.

As eyewitnesses tell the local media, an avalanche of stones and mud hit the hotel literally suddenly and swept the first and second floors of the building. Rescue services evacuated tourists literally in dressing gowns. Fortunately, there were not so many seriously injured – two tourists remain in hospitals, they are in stable condition.

In addition to the deceased tourist, two more tourists are being searched – also from a group that arrived from Uruguay. It is hoped that the two missing women left the hotel on a tour, but local authorities fear they could return and be buried under the rubble. At the same time, a search operation using rescue dogs had to be suspended due to fears that the building could collapse.

The landslide also covered the neighboring hotel, but there were no casualties, local media add.

< p>For those who care about a healthy lifestyle, we recommend reading: “A nutritionist revealed 6 reasons why you should eat pumpkin.”