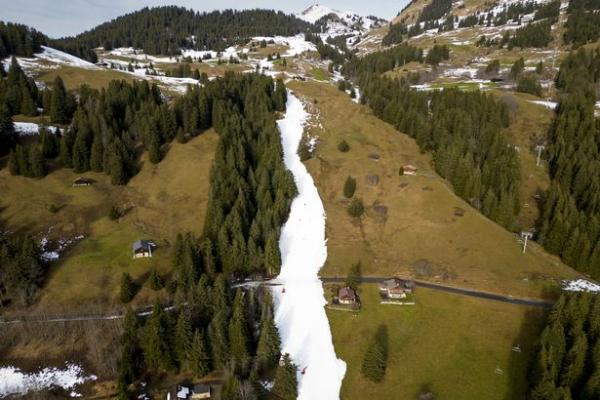 Popular ski slopes located in Europe are forced to close due to an abnormally warm winter. The climate crisis has gripped France, Austria and a number of leading European ski destinations. The ski season has entered a crisis phase.

Winter season 2023 in Europe is under threat

According to experts, the winter season may be disrupted. As the Mirror explained, the high air temperature is caused by emissions of carbon dioxide and nitrogen dioxide, which led to a warm winter unsuitable for ski tourism, despite the fact that the calendar winter season is in full swing. Record temperatures have threatened skiing and snowboarding and active winter tourism this year. Warm weather is a disaster for resorts.

Fans of skiing in Europe in December-early January were met with dirty slopes: rain and sleet, combined with warm weather, led to snow melting. Resorts in the northern Alps and the French Pyrenees suffered.

In France, 50% of the resorts were closed due to the climatic anomaly. For example, the Ax 3 Domaines ski resort was forced to close indefinitely, while Le Gets and Morzine only opened a limited number of slopes. “The period immediately after Christmas (December 25) was the warmest since 1997 in France,” with “exceptionally high” temperatures recorded, local publication France reported. We are talking about exceeding the average seasonal norm immediately by 8 degrees. This was enough to make many ski resorts located at lower altitudes unsuitable for winter sports. At the same time, photo and video evidence of the climate crisis was circulating on European social networks: many skiers filmed themselves standing in the mud, while ski lifts flew over their heads.

Austria, Switzerland and others

Austrian ski resorts in the Salzburg region haven't had snow for at least a month, while parts of Switzerland are 20 degrees warmer than usual. “After years of warnings that temperatures are rising in resorts and skiing is getting harder and harder, the start of 2023 seems to justify the worst fears of many tourists,” Mirror noted.

Powerful climate deviations are explained by increasing levels of carbon dioxide and nitrogen dioxide emissions, rising global temperatures – the situation is likely to worsen from year to year, experts say. Deteriorating conditions in the Alps may force some winter sports enthusiasts to look for new pistes in alternative destinations.

One country that has become increasingly popular in recent years is Bosnia, which is known for offering packages at discounted prices compared to France, Italy, and Switzerland. Unfortunately, the state is also suffering from a difficult winter due to unseasonably hot weather, forcing travelers to pack up and head home right after New Year's Eve celebrations at the resorts. According to hotel owners, the number of bookings has decreased, and with them the prices of rooms and the number of staff.

Tourist officials said holidaymakers are being forced to look for alternatives to skiing, such as hiking on grassy mountaintops or ski lifts, simply for panoramic views. “Right now, when we have to welcome skiers on our mountain, we have no snow, so there is no doubt that our business will decline, which was to be expected,” complained Dino Korugic, manager of the Sunce Hotel in Vlasic, lamenting that bookings strongly correlated with the weather forecast.

Record high daily temperatures for December-January have been broken in recent days at hundreds of weather stations in at least 10 countries: Bosnia, Belgium, Czech Republic, France, Germany, Latvia, Lithuania, the Netherlands, Poland and Switzerland. At least five of them — Belgium, the Czech Republic, Latvia, Poland, and the Netherlands — set national record daily highs for December 31 or January 1.

The United Nations World Meteorological Organization has previously warned of the detrimental effects of climate change. According to her report, the past eight years have been the hottest on record.

Indeed, the effects of this winter have not been limited to snowless slopes, where average altitudes have suffered the most: meteorological services and scientists say that flora and fauna also feel the impact of deviations. For example, meteorologist Florian Imbury of the German National Meteorological Service said that the temperature anomaly observed during the New Year period could provoke unwanted plant growth, exposing crops to a greater risk of frost damage at the end of winter. Biologist Livio Rey, spokesman for the Swiss Ornithological Institute, added that many ducks, such as the tufted duck, which usually migrate to Switzerland from the Nordic countries at this time of the year, no longer arrive.

For those who care about health lifestyle, we recommend reading: “Scientists have established a favorable diet for pregnant women.”