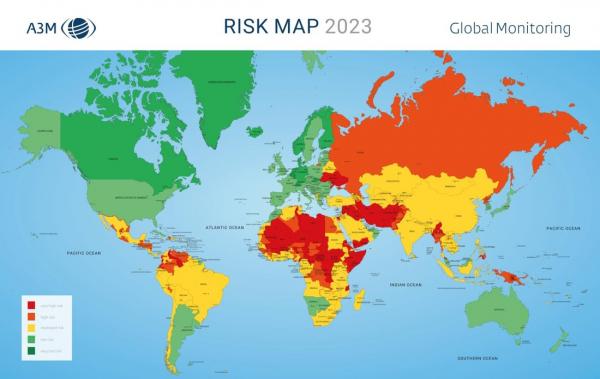 The map of the most dangerous countries for travel in 2023 was published by the German organization A3M Global Monitoring, which deals with the safety of tourists around the world based on a global monitoring system. This is stated on the company's website.

According to the report, the country risk assessment was based on categories such as entry/exit, transport, available infrastructure, natural security, the level of terrorist threats, strikes, etc. Analysts have divided the world into five levels of risk, where countries and cities are classified from “very low” to “very high”. Due to the Ukrainian crisis, there have been many “tectonic” changes on the map. Popular tourist destinations are also recognized as risky for travel.

Among the most dangerous countries were Syria, Yemen, half of Africa (Libya, Somalia, Mali, the Central African Republic, etc.), Ukraine, Donetsk and Luhansk republics, Kherson and Zaporozhye regions, as well as Iraq, Iran, Afghanistan, part of Pakistan and Myanmar . On the map, they are marked in red, which means “very high risk.” For example, it was explained that Iran “blushed” because of the protests that had been taking place there for some time.

According to the classification on the map, the security situation in many countries in South and Central America has also changed. The risk of traveling to these destinations has increased dramatically. So, travelers are not recommended to travel to the southern part of Colombia due to the increased level of crime and violence and to the north-east of Nicaragua.

It is noteworthy that Russia, together with Crimea, was included in the list of countries with a “high risk”. On the map, the territory from Kaliningrad to Kamchatka is marked in orange. “Travelers face a high level of risk and must be prepared for country/region restrictions, so special arrangements (such as individual safety plans) must be in place prior to departure. Travel to these areas is generally not recommended,” the description states.

On a par with Russia in the field of security, according to experts, was Venezuela, Papua New Guinea, half of Pakistan, Egypt and Chad. The organization noted that in such states from time to time there are periods of political instability, violent protests and terrorist attacks, and travelers can suffer from the actions of local residents, religious fanatics or racists. You should not rely on the protection of the police, because. its efficiency varies depending on the region.

The USA, Argentina, a “solid part” of Europe are recognized as low-risk countries for tourism: Sweden, UK, Estonia, Latvia, Lithuania, France, Spain, Italy, Czech Republic, Austria, Poland, as well as Malaysia and Australia. On the map, they are marked in light green.

The safest countries for travel turned out to be only a few – these are Canada, Norway, Denmark, Finland, Iceland, Switzerland, Slovenia and Luxembourg.

For for those who care about a healthy lifestyle, we recommend reading: “Researchers from the USA found that women with large hips and cellulite can be protected from disease.”