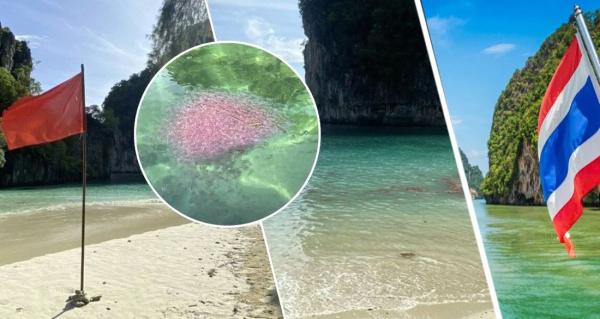 On one of the popular beaches in the resort province of Krabi, tourists were forbidden to swim in the sea. The reason is that a large number of fiery jellyfish, which are deadly to humans, were thrown onto the beaches.

According to The Thaiger, it is traditional in Thailand to notify tourists of the danger by raising red flags on the beaches. This time, tourists in warm waters are threatened by an invasion of box jellyfish Morbakka fenneri, also known as “Fire jellyfish”.

Thousands of small but deadly poisonous animals washed up last Sunday on Hong Island in Krabi Than Bok Horani National Park. It was clarified that a change in wind direction brought them to the island. The head of the national park, Weerasak Sisatchang, noted that fire jellyfish are very poisonous, and their bite causes severe burning pain or even death in cases where there is a strong allergic reaction.

Experts expect dangerous sea inhabitants to move away from the shore after 1-2 days. Then experts will check the water and only then tourists on Hong Island will be allowed to swim again.

Reference: The individual looks slightly larger than ordinary jellyfish, the color is pinkish red. She got her name because of the powerful sting. It belongs to the most poisonous jellyfish in the world. If a tourist is stung by a fiery jellyfish, it is best to immediately pour vinegar over the affected area of ​​the skin not with water, but with vinegar.

For those who care about a healthy lifestyle, we recommend reading: raise glucose levels.