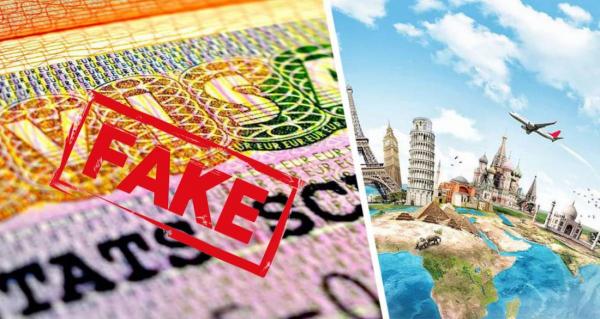 Excessive demand for “flight from Russia” in connection with partial mobilization with incredible speed formed a huge number of scammers who organized a black market for services for “departure”. One of the most common offers was fake Schengen visas. However, information security experts on the pages of Izvestia warned potential fugitives from conscription – you can leave with forged documents only “on bunk beds” for breaking the law.

As experts said, scammers mainly catch their victims in dark web and Telegram channels. The main proposals are assistance in obtaining visas without the presence of the applicant (of course, fake ones), as well as passports of foreign countries. In addition, there are proposals for illegal border crossing.

But a fake Schengen among the above is the most common and cheapest service. The average price is $500–800. Recall that the “legal” Schengen with all the complications for Russians is issued for 80 euros. At the same time, Izvestia experts evaluated the work of the fraudster on themselves by ordering a “service” in one of the Telegram channels. They asked for $800 for the service, setting a production time of 3-5 days. Interestingly, on the other hand, they even honestly warned that the document would not be entered into the visa information system (VIS) of the Schengen countries. That is, in fact, for such money, the “fugitives” are sold “beautiful rendering”, which is a fake.

As experts explained on the pages of the publication, there are conditionally chances to leave Russia on such a “visa”. But it will be unrealistic to enter the EU: first of all, the European border guard will check the visa for its presence in the VIS system and recognize the fake. Moreover, alarmists were reminded that since 2015, the Schengen countries have been accepting tourists on biometric visas, and even for short-term visas, fingerprinting is required. Moreover, in many Schengen countries, biometric identification of a person, that is, verification of data, is carried out immediately at border control upon arrival in the country. Moreover, as experts added, even a European prison does not shine for fugitives for such an escape.

“Responsibility for the use of fake visas depends on the current EU legislation and the country where such an incident was recorded. Based on global practice, in the simplest cases, the holder of a fake visa may face a large fine with blacklisting or a ban on entering the EU for life, and most importantly, deportation home, where in the most serious case criminal liability awaits, ”the experts explained on the pages “Izvestia”. Those who wish were once again reminded that behind all such offers there are scammers whose ultimate goal is to steal the victim’s money and nothing more.

“In the darknet and Telegram channels, there is indeed an increase in the number of visa applications. They can be divided into two categories. The first is fake visas, that is, empty pieces of paper that are not included in any databases. With high-quality execution, they may not visually differ from real visas, but this will not help you to use them. The second category of announcements is assistance with the preparation of these documents and simplified obtaining of a visa,” Sergey Trukhachev, head of RTK-Solar Internet threat analytics, explained to Izvestiya. If the details of the first option are disclosed above, then the second one seems to be a completely standard service that has existed for a long time.

However, fraudulent organizations also operate here, the specialist noted. “Over the past three years, we have recorded more than 500 fake websites of visa centers in various countries. They, in particular, promise to issue documents in a short time without the presence of the applicant, and this is also a scam. A positive decision to issue a visa without an interview in the current conditions requires the assistance of at least the vice-consul, and he is unlikely to participate in this scam for a share of 30 thousand rubles,” said Ashot Oganesyan, founder of the DLBI data leak intelligence and darknet monitoring service.

Experts explain the rate of reproduction of fraudsters by the fact that those fleeing from mobilization are the most “fertile ground” for them. Most likely, such victims will not go to law enforcement agencies to complain, at most they will tell about deception in social networks. And such statements already exist. “One of the darknet users told a story that he ordered a passport from another state. The scammers reported that the cost of such a service would be about 100 thousand rubles and the document would be visually as similar as possible to the original. A few days later he received something completely different from what he ordered. The document bore little resemblance to the original, the colors differed in it, and the photographs were black and white instead of color. The request to redo the document was denied to the user, the scammers stopped getting in touch,” Izvestia said.

At the same time, the experts recalled that the full list of documents for obtaining EU citizenship in Russia costs about €5–6 thousand, and this procedure is formalized through legal offices. From this it is easy to understand that no one will issue a real passport for the amount of 100 thousand rubles. But the tourist got off lightly – if he approached the border post with such a handicraft forgery – he was at risk of “raising the term” for fraud with documents. And this is up to three years in prison.

For those who care about a healthy lifestyle, we recommend reading: “The Russians called houseplants that improve brain function.”