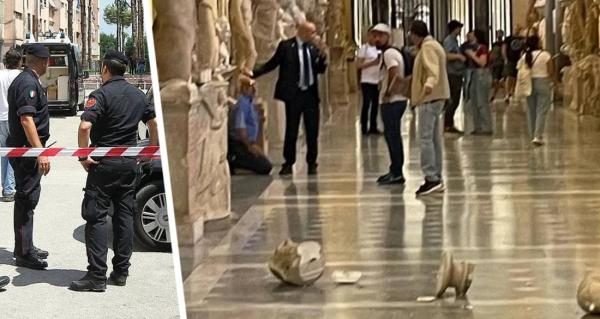 A foreign tourist smashed two valuable ancient Roman statues in the Vatican to smithereens. The incident occurred on October 5 at the height of the day.

The incident was recorded at the Chiaramonti Museum, which is part of the Vatican Museums, which exhibited to the public “one of the best collections of Roman portraits” in the world. For connoisseurs of art, about 1'000 works of ancient sculptors were presented.

However, after a visit to the exhibition by one tourist, at least two of these statues now face an uncertain future. According to CNN, the man, believed to be American, knocked over one artifact and then another in anger as he fled the scene. It turned out that the visitor demanded a meeting with the Pope, the newspaper Il Messaggero reported. When he was told that the head of the Catholic Church could not meet with him, he allegedly threw one Roman bust on the floor and the pieces shattered. Trying to escape from the place of emergency, the tourist “hooked” another one.

Two works of art were taken to the workshop for damage assessment. Despite being about 2,000 years old, they are considered minor works of art, not well-known works, a source told Il Messaggero. According to La Repubblica, one bust's nose fell off. As for the tourist, a spokesman for the Vatican Museums said: “The man who knocked down the statues was stopped by the Vatican police and handed over to the Italian authorities.”

It is known that Italian law is very harsh on vandal tourists who encroach cultural heritage of the country: violators are subject to huge fines, expelled from the country and prohibited from subsequent entries. Especially foreign travelers distinguished themselves in the Vatican last summer. So, in July, a Canadian tourist was caught carving his name on the wall of the ancient Colosseum amphitheater. At the same time, American tourists were caught hurling scooters down the famous Spanish Steps, breaking off pieces in the process. The culprit of the third incident, which was also included in the “black list” of the authorities this summer, was a traveler who arrived in the legendary city from Saudi Arabia and decided to ride a rented Maserati on the same architectural icon.

For those who care about healthy lifestyle, we recommend reading: “Resistance breathing training has been found to lower blood pressure.”