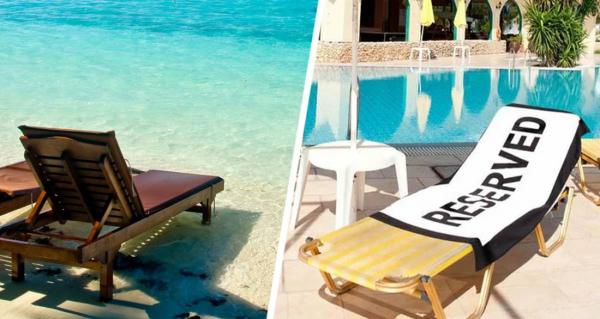 Along with the massive return of tourists to the resorts of the Mediterranean, the main problems that tourists bring to each other and others have returned. On the beaches of popular resorts in Europe, the “war for sun loungers” has begun again – tourists, one after another, are filming videos of crazy vacationers “bursting” onto the beach at six in the morning to take sunbeds in the best place, throw a towel there and leave. And others a little later throw off these towels and take the sunbeds for themselves … a real war for a place in the sun.

“Typical holidays in Spain,” one of the tourists signed such a video from Mallorca. According to her commentary, the “lunatics” wars for sun loungers every day start at six in the morning – and tourists literally move in crowds, laying out towels and beach bags in the best places to make sure they have a place.

The video received over a thousand likes and many comments. There are those who sympathize with the fighters for sun loungers: “My dad always got up at 7 in the morning and did it,” says one tourist. But most commentators are quite puzzled by the “fighters”. “I never understood why people go on vacation like that”, “This is some kind of chaos,” tourists write.

By the way, “fighters with fighters” were also noted – i.e. those who, in principle, occupy already occupied sunbeds, often dumping the left things. “As soon as they leave, I will remove the towels and take a sun lounger. Be where you decomposed, or leave,” one of the tourists is indignant.

Tour operators, by the way, are trying to fight by introducing the practice of booking sun loungers in advance – and it is in demand. Although many bookers do not refuse to try to break into more trump places.

The practice of leaving towels on sunbeds to reserve them is far from new – it has always been common among British and German holidaymakers at resorts. Back in 2014, German tourists among those who insanely annoy them at the resorts named those tourists who “steal sunbeds”: they put a towel and leave for two or three hours, so that no one can get even close. These tourists took fourth place in the ranking of unloved. Interestingly, they mainly blame the British for this, and not their compatriots. Read the details here.

Were in the “war for sunbeds” and “victims”. One tourist said, for example, that during such a morning race he broke his finger. However, there is a possibility that the entire tanning industry and the sun loungers themselves may become a victim of a new fashion for a healthy lifestyle – after sugar and fat, tanning can also be considered deadly. A ban on sun loungers on the beaches, researchers from the University of Manchester said, could save at least 200,000 young tourists from skin problems – up to fatal ones. The study was conducted by the team, including in Australia, where sun loungers on the beaches are already prohibited. It should be noted that on the southern continent, on average, extremely active sun and skin cancers are a national problem. “A study of health problems associated with tanning shows that a sun lounger ban could reduce the number of people with skin problems by 200,000. Moreover, we are talking about skin cancer, which often develops in young people, ”the authors of the study said. Read the details at the link.

For those who value a healthy lifestyle, we recommend reading: “The doctor revealed to whom and why you need to eat pomegranates.”